Welcome to our class

We had a fantastic trip to Harlow Carr and spent the day enhancing our knowledge of plants and the natural world. We made some detailed sketches of plants in the Alpine House, learned about the types of vegetables and fruits which are grown in the Kitchen Garden, enjoyed the different smells in the Scented Garden and watched Smooth Newts in the pond! Have a look at the photographs below to see our day in more detail.

In Science week, we were lucky enough to have a visit from Anna's mum, Dr Kirkup, a GP. She showed us lots of cool stuff, from which plants make medicines to what some of the equipment is for. We even got to test some [fake] urine samples to see what conditions or illnesses people might have. It was a lot of fun!

We also enjoyed learning about non-Newtonian fluids, hitting and gently touching a mixture of cornflour and water to see what happened. It was interesting to see how it behaved as a solid one minute and a liquid the next, depending on the force that was put on it!

To launch our Ancient Greek topic, we held a class Olympics on the school field. We won points for our teams with our efforts in the javelin, running relays and we even worked together to create a timed chariot race around the track!

Well done to Theo and Lilly on receiving their Special Mention certificates. Theo has shown super determination this year, especially with his handwriting and has impressed me with his enthusiasm for learning. Lilly is a fantastic pupil, friend and role model to everyone - she always does her best and is a real asset to our class!

Last week, we passed a lovely week learning about the Royal family and making our own preparations for the Royal Wedding. We designed and made invitations for our adults, decorated hats for the hat parade and even did some problem solving to work out the seating plan for the big day!

On Friday, we had a big garden party and paraded around the track in our wonderful hats. We also ate some of the cakes which had been brought in for the Bake Off! Amina won the Year 4 prize for best cake, but there were some super entries - I'm glad I wasn't a judge! 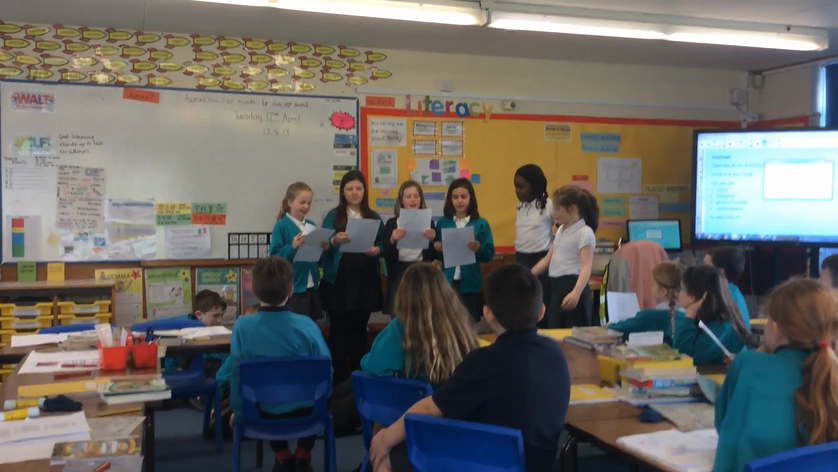 In Literacy, we have been learning about poems which tell a story, such as 'The Owl & the Pussycat' by Edward Leah. We have enjoyed reading them aloud, learning sections by heart and finally writing our own, using the original structures to frame our own ideas.

Over the next six weeks, 4H, along with some of 3K, are attending a course of badminton lessons at Harrogate Racquets. So far, we have enjoyed learning how to serve and play in mini-doubles matches. Thanks to Dennis and Vanessa, our coaches, for their time and enthusiasm!

Today we held a Cultural Morning, where all children were able to choose to learn about an aspect of a new culture, in groups with children from different year groups. From Brazil to South Africa, Japan to Hawaii, everyone enjoyed learning something different, which they were then able to share with their classmates afterwards. It was great to see such a range of activities and such big smiles all around!

Falcons at the Dishforth Dash

Joseph, Miss Hind and Ted with their medals

Ted and Joseph ran the Junior 2k race at Sunday's Dishforth Dash, with Ted coming in an impressive 4th place behind some older, bigger runners. Miss Hind completed the 10k race. It was a very sunny morning and Joseph and Ted's cheering was much appreciated!

This year, instead of receiving presents and money, Lilly asked for donations towards St Michael's Hospice. She brought in the certificate and rosette she received to show. A kind, selfless thing to do Lilly - you are helping to make a difference to other people's lives!

On Monday 12th March, Enterprise Afternoon took place at OJS and much fun was had in the Falcons Classroom! Our stalls were based around our previous class novel, Ratburger, and we were very imaginative in thinking up good ideas! We had Find the Rat, Pie in Burt's Face, Find the rats in the Jelly, Hit the Rat and a refreshment stall. All together we raised just over £42. Well done everyone, a great team effort! 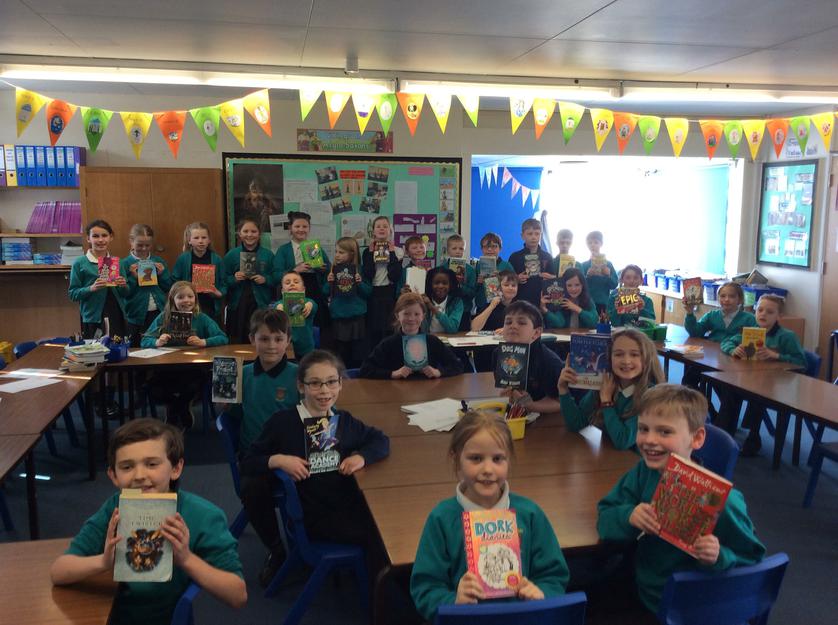 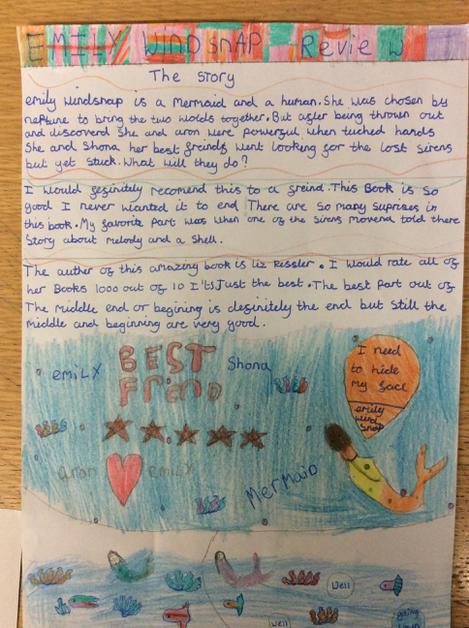 For World Book Day, we brought in our favourite books to share with the class. We wrote brilliant book reviews, visited theme rooms and some of us were lucky enough to take part in a workshop with the poet, Annaliese Emmans-Dean.

Well done to Millie and Ellis for their special mentions last half term! Millie for showing fantastic resilience and a mature attitude and Ellis for his hard work in transforming himself into an engaged and active member of the class. Keep up the good work!

During Arts Week, 4H took part in a series of workshops: working with the Northern College of Contemporary Dance; looking at works of art with the Mercer Gallery and working on a clay installation with local artist, Anna Whitehouse. We also looked at shape in Art in Maths and designed and painted a plant pot, each themed around an individual word. They look fantastic! It was a very busy week, but lots of fun and we were able to really use our imaginations.

We made Viking longships as part of our topic. 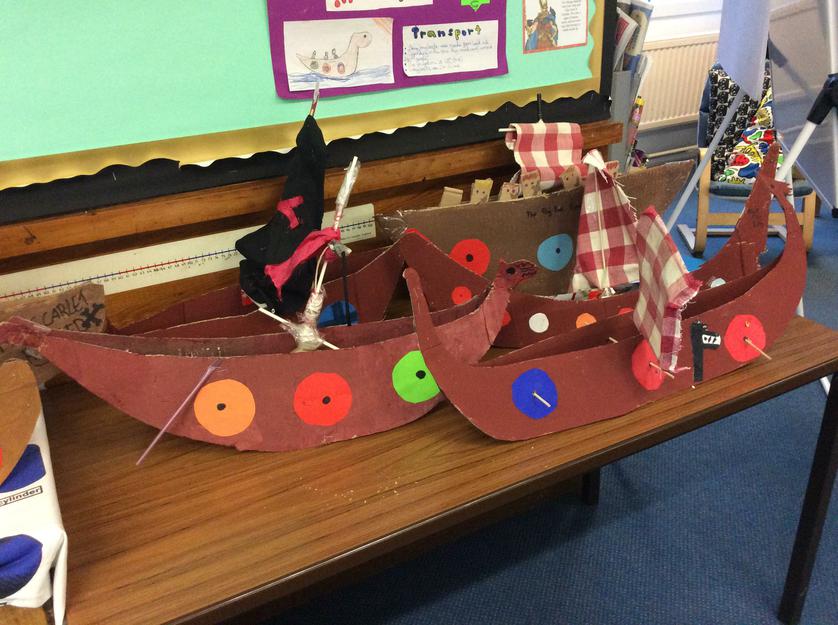 We made Viking longships as part of our topic. 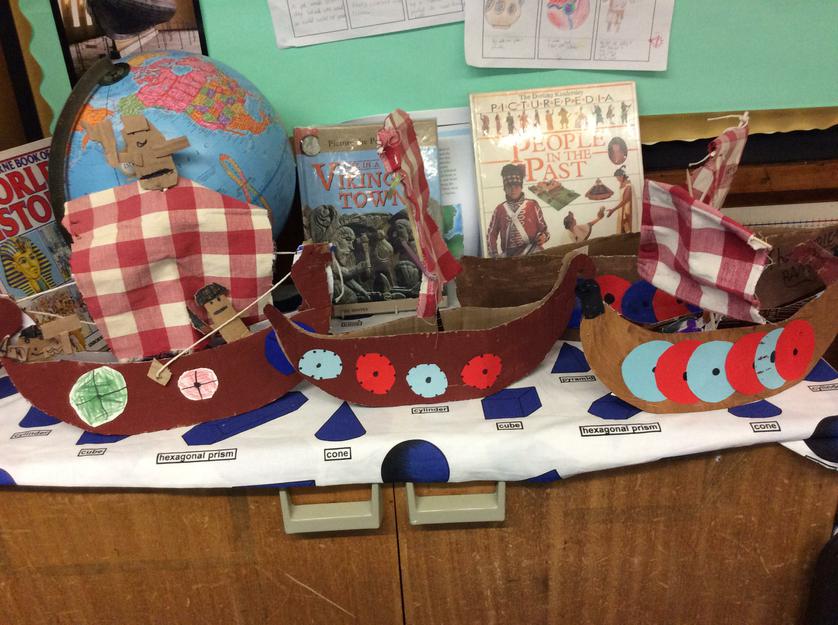 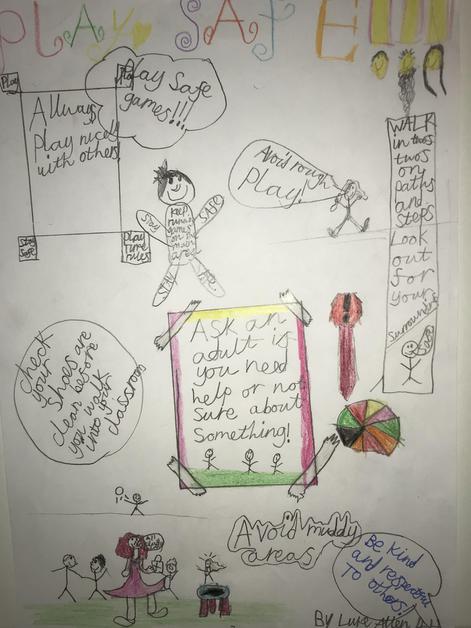 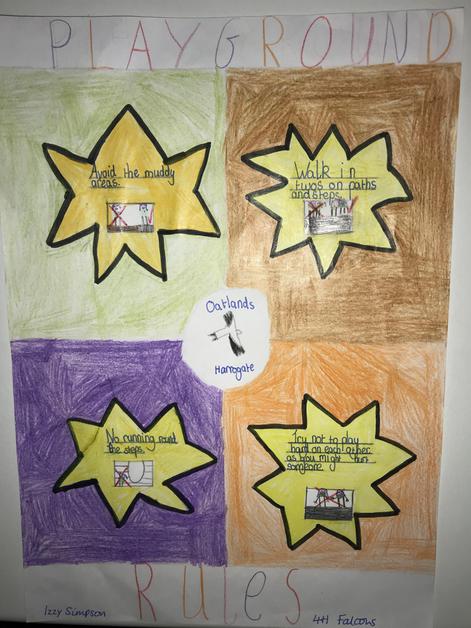 Our school has started the new year with a school resolution to play safely on the playground. Miss Weir tasked each class to create colourful posters with the theme of staying safe and helping others during the school break times. It was very difficult to pick just two posters to be displayed around the school as the children worked hard to include pictures, writing and even acrostic poems! Well done to Izzy and Luke for their bright and informative work! 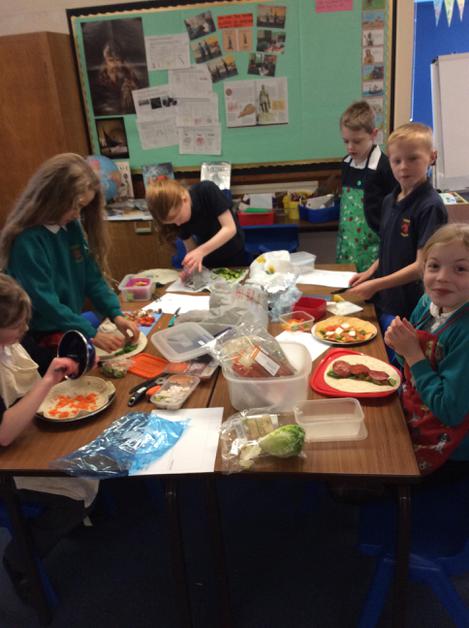 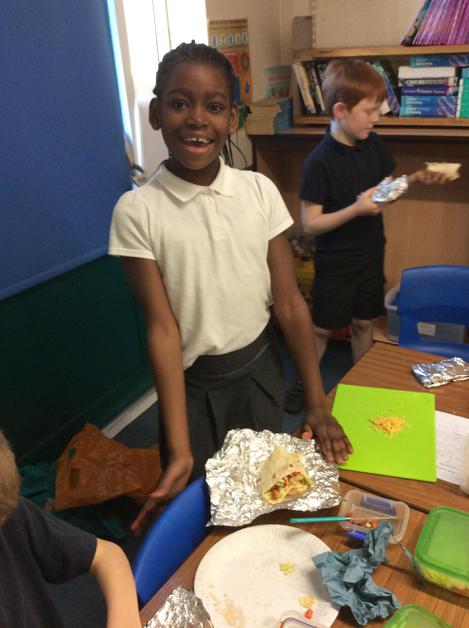 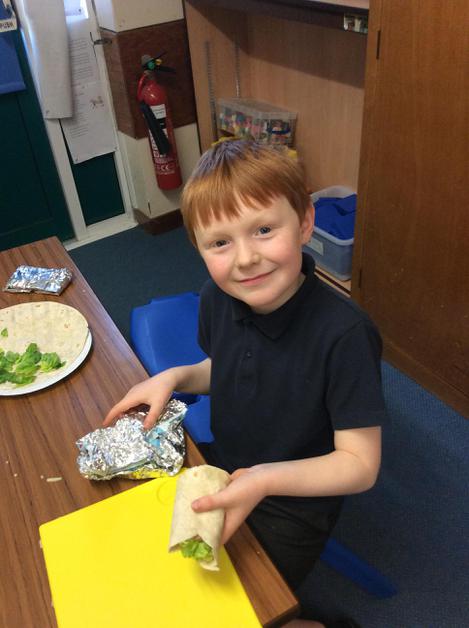 In our Science and DT work, we have been learning about healthy eating, food groups and staying fit and healthy. We designed our own wraps to make, bought the ingredients and then made them at school. They were really tasty!

The Falcons' theme was 'Santa Claus, so we made Santas which were able to move their arms and more importantly, move up and down their chimneys! We also found out about Saint Nicholas, the original Santa Claus.

Lilly tells us about Hanukkah 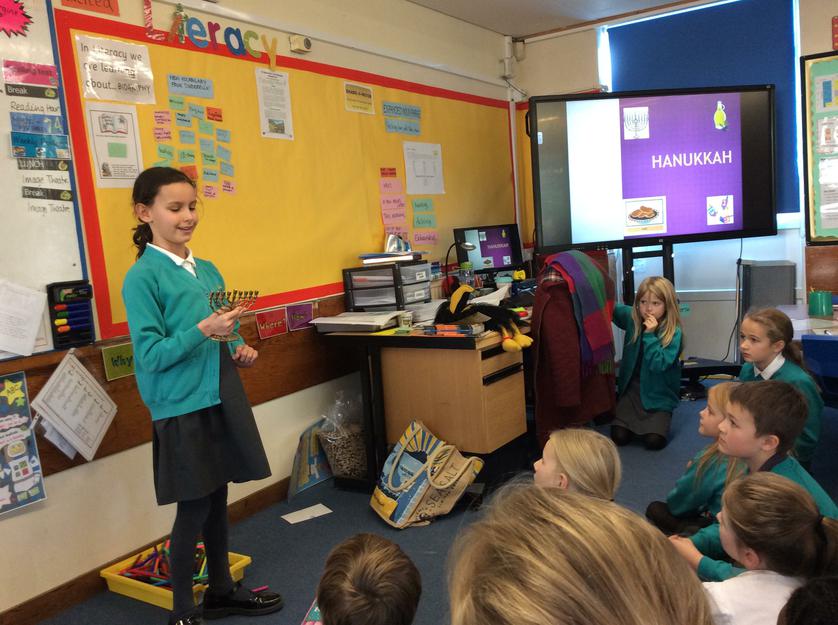 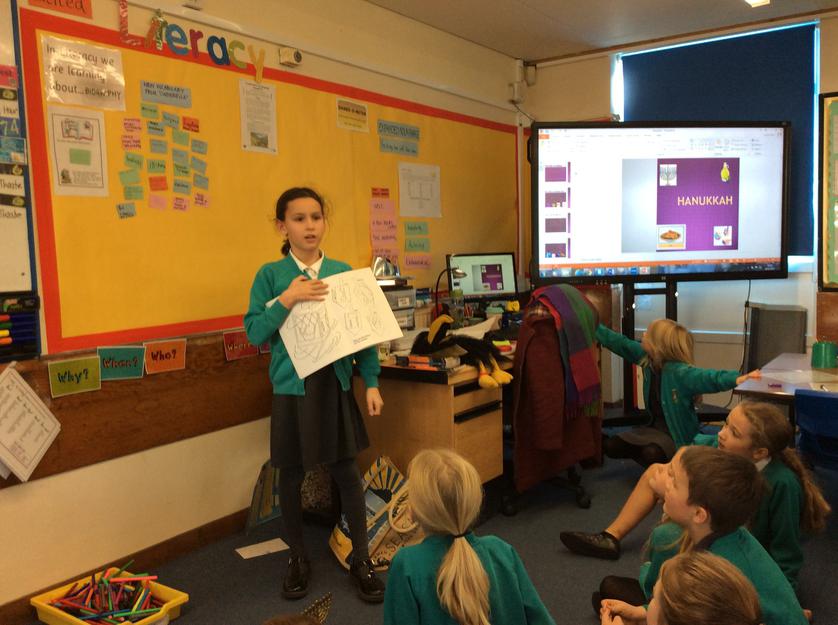 Lilly's family celebrate Hanukkah, which begins on 12th December and lasts for 8 days. She explained about some of the customs that she and her family enjoy over Hanukkah and shared a prayer in Hebrew with us.

Wind in the Willows - Image Theatre 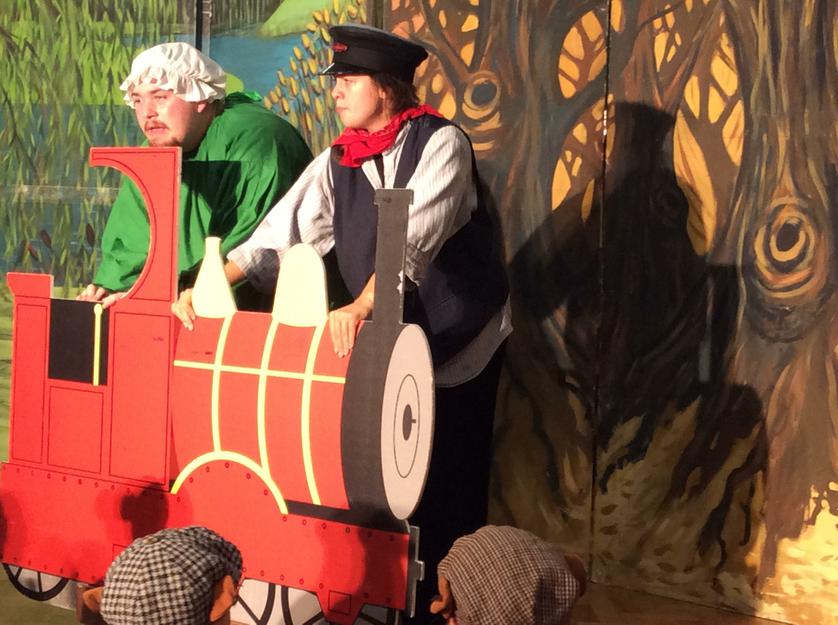 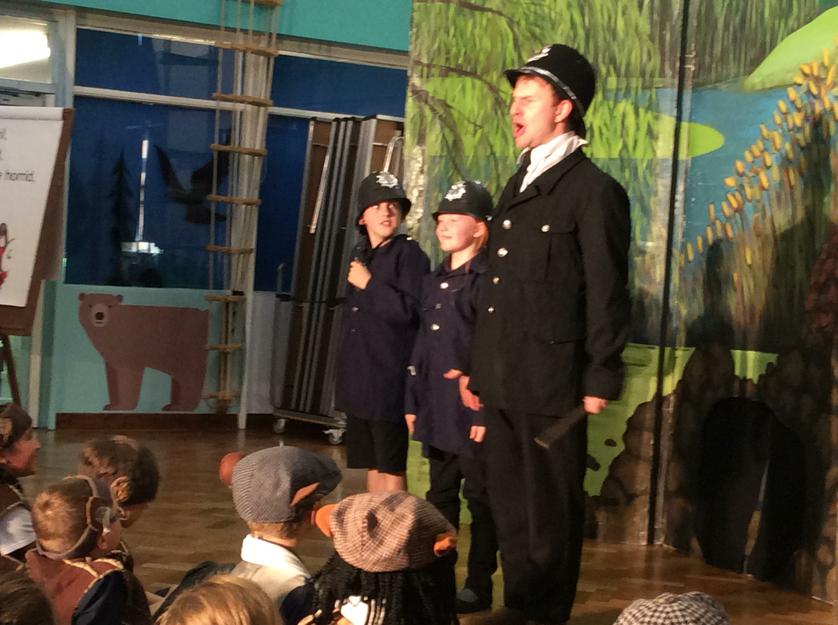 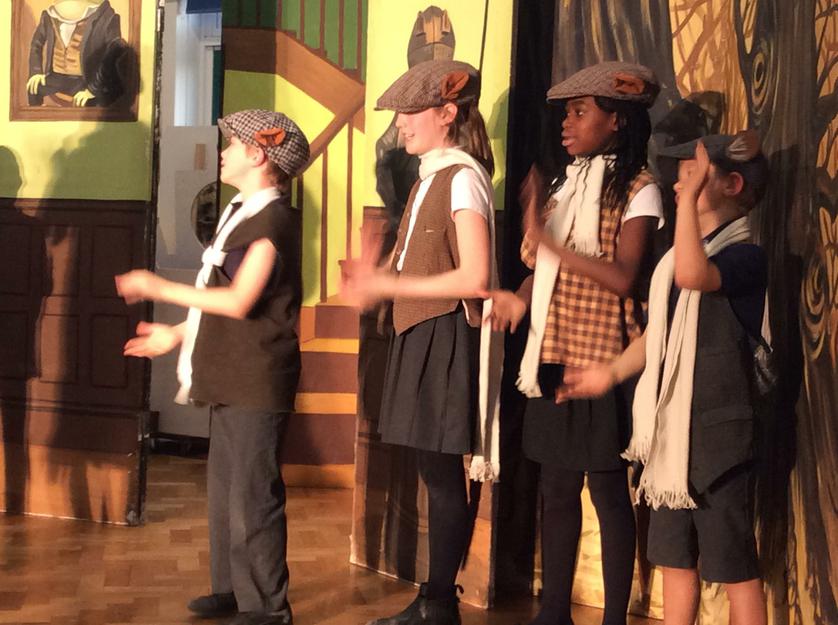 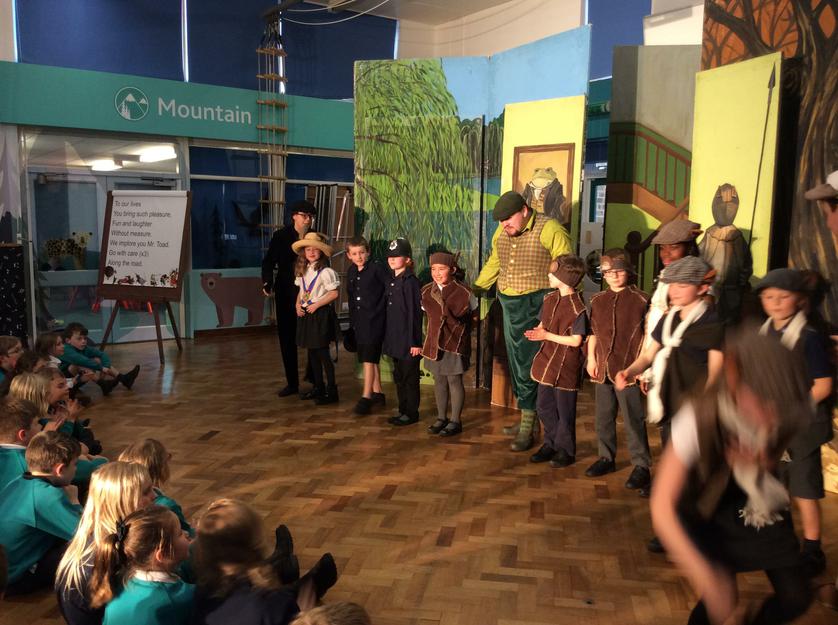 Image Theatre visited Oatlands Junior School on Friday, performing Wind in the Willows. Winnie and Amina were selected to take part in the production, but everyone was able to join in with the singing too!

On Monday 13th November, Ted's Dad, Commanding Officer Crossland, visited Oatlands Junior School to help Year 4 mark Remembrance Day. He told us lots of information about life in the army and we were able to acknowledge the Armistice with a minute's silence. This followed The Last Post, which Private Holliday played on his bugle.