At Oatlands Junior School Religious Education encourages pupils to explore their own beliefs, values and traditions and those of others in meaningful and engaging ways. Pupils share their diverse range of experiences and grow individually and together with sensitivity and respect towards people of all faiths and none. Through high quality learning experiences we enable children to explore beliefs, investigate moral and ethical issues, appreciate diverse viewpoints and celebrate diversity (SMSC).

Thank you to everyone that made a donation to our Harvest Festival display last Friday. So many dried and tinned goods, as well as toiletries, that were given will help those in need at the Harrogate Homeless Project. We enjoyed a lovely assembly with Reverend Kim and listened to all the fantastic harvest work that had been happening across the school. Well done everyone for your super effort!

Today's assembly had the theme of kindness. The children enjoyed Jaynie's creative retelling of The Good Samaritan, including some drama from the pupils and ideas about being kind. We have also learnt that this will be Jaynie's last assembly for us, having being offered a new job away from Harrogate. We wish her luck in her new role and our thanks for the lovely assemblies this year.

We were very happy to welcome back Reverend Ben today. He gave a thoughtful and interesting assembly all about the importance of telling the truth. He told the story of a young girl called Jessica whose lies ended up becoming a burden, illustrated through the use of toilet paper! After each lie in the story a new layer was added, and by the end it was very tricky to break out of the lies. Reverend Ben reminded us that the bible states that the truth will set us free.  Thank you to Ben for another great assembly.

This term the children are enjoying learning about Islam in both lower and upper school. This is timed to coincide with Ramadan which takes place through May and into June.

On Thursday it was a pleasure to welcome back Jaynie Kendall from the Nidd Valley Methodist Church Circuit. She gave a fantastic assembly with the theme of following. Jaynie told the children an exciting version of the story of the Miraculous Catch of Fish, with volunteers helping from the audience, which revealed Jesus to Peter after his resurrection. The children were able to reflect on what following meant to them and the kind of people, examples and dreams they may wish to follow. A big thank you to Jaynie for the fantastic assembly.

On Thursday we were lucky enough to enjoy an assembly all about friendship, given by Reverend Kim from St Marks Church. She reminded us of the story of Peter lending Jesus his boat to fish and how they became great friends. Peter was later to deny Jesus but was forgiven, a useful lesson to all the children about their friendships and forgiveness.

It was a pleasure to welcome back Janynie Kendall. We were in for a treat as her assembly was both an interesting reminder of what is important to Christians bout Easter and as always fun, with mystery boxes revealing talking points throughout.

This Spring Term has culminated with work on Easter, with Lower school focusing on Salvation and Good Friday and upper school on the question 'What did Jesus do to save human being?'. Earlier in the year faith through the arts was a focus and some of our work can been seen in the photos below.

On Thursday we had a fantastic assembly given by Dan Watts from St Marks Church. The children enjoyed the 'price is right' game that highlighted to us how good we are at putting monetary value on items. However, it is important to remember the value of things we can't put a price on, such as acts of kindness.

It was wonderful to welcome back Jaynie Kendall for her first assembly of the New Year. Her assembly had a great message all about perseverance. Jaynie shared the powerful and inspiring story of British Olympic athlete Derek Redmond and spoke about how her faith helped her to persevere.

On Tuesday many of you joined us for our annual concert at St Mark’s; it was a fantastic evening and we are proud of the children at Oatlands for their musical talents. The children in the Arts Committee spoke confidently as they shared their Christmas wishes and we were entertained by the audience participation on The Twelve Days of Christmas.

Thank you to all those who donated to our charity – Martin House Hospice - during the collection. We received a generous £529.16 – thank you!

A big thank you to everyone who supported the PTA and School Council Secret Christmas Shop on Friday 14th December. Lots of fun was had, both by the children and the PTA running the shop and by the children doing the shopping! At the last count, a fantastic profit of £266 was made. All of this profit will be donated to the Harrogate Homeless Project. A representative from the charity is coming to visit us in early January, when we will present them with the money.

We are hoping to choose another charity to support in the Spring term with a different fund-raising venture, this time led by the Lower School Council members and the PTA. Details to follow in the new year.

Every class has worked very hard to create the Christmas display this year. As you walk between the displays, the story of the birth of Jesus is told.

On the 15th of November, the School Council were proud to represent the school at a World War One Centenary Event. Held a Christ Church and Organised by Terry Knowles of the Rotary club of Harrogate, the event included readings and songs with music by St Aidan’s brass group and singing from St Aiden’s chamber choir. The School Council were exemplary representatives at this touching tribute to the fallen of WWI.

It was a pleasure to welcome back Rev. Ben along with Jaynie for an entertaining and informative assembly on respect, linking perfectly to anti-bullying week. Our thanks to both and we look forward to seeing them again soon.

A huge thank you to Colonel Crossland, (Ted and Barney’s dad), who kindly gave up his time this morning to lead our Remembrance Assesmbly. Colonel Crossland explained to the children why we wear poppies and what it is we are remembering on the 11th November each year. Colonel Crossland also explained and showed the children a blue cornflower badge, which the French use to remember the fallen. We then held a collective minutes silence, which everyone respectfully observed. The children were particularly interested in the story of ‘Sergeant Stubby’ – a boston terrier.

We had a wonderful assembly to celebrate Harvest Festival with a special visitor, Reverend Kim, from St Marks. Thank you to her and to all the parents and children for your fantastic support in making harvest donations this year in aid of the Harrogate Homeless Project.

On Tuesday 3rd July, we had our final assembly from Matt Lunn. Over the years, he has given many excellent assemblies at Oatlands Junior School. They have always been interesting, had a clear message and most of all the children have enjoyed them. He is leaving to take up a new position in London, with which we wish him the best of luck. 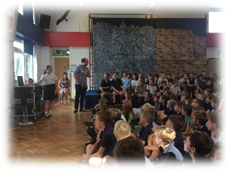 On Tuesday the 26th of June 2018 group 1 went down to the Harrogate Synagogue on St Mary’s Walk. Michael was our guide and told us many interesting things about the synagogue and Judaism. Things like each Torah scroll is hand written costs around about £35,000 each! There was a pointing stick so when you read out the Hebrew you do not touch the parchment. In Hebrew the pointing stick is called a yad. It was a very interesting experience and the first time many of us had ever visited a synagogue.

On the final day of the Spring term the whole school took part in a Cultural Event. We learnt more about what makes up cultures, including religion, food, music, language and much more. Each class had a different culture they learnt about as well as a fun dance or craft activity. Children signed up to different classes and later in the day returned to their usual class to share what they had found out. Here’s what was going on in each class.  3H Brazil – Carnival. 3M Caribbean – Fruits and Foods. 3/4K South Africa – dance. 4H Japan – Calligraphy. 4G Hawaii – Flower leis. 5M New Zealand – Haka. 5T Australia – Aboriginal Art. 5/6C India – Bollywood Dancing. 6FW Iceland – Designing mythical creatures. 6M China – craft. 6G Native American Art and Language.

Year three thoroughly enjoyed their trip to learn more about the church and how it prepares for Easter. A big thank you to Dan Watts, Associate Vicar, for showing the children around.

We were very lucky to once again welcome Matt Lunn, who was joined by his colleague The Reverend Ben Clowes. They discussed the New Year and how its brings the chance for a new start and new opportunities. They related this to stories from the bible and we shared our resolutions for the new year. It was fantastic to take the time to reflect on this and we look forward to welcoming them both back again soon.

Each class has created a super Christmas display with a unique theme, incorporating elements of Christmas past, present and future. Each displays shows the children's hopes for future Christmases as well as all having a element designed to move using a variety of different levers and flaps. The displays also provided an excellent opportunity to explore spiritual and cultural elements of each theme.

We enjoyed a fantastic assembly from Matt Lunn, who as always was both entertaining and informative. The assembly was a great and timely reminder of the meaning behind Advent.

Lilly's (4H Falcons) family celebrate Hanukkah, which begins on 12th December and lasts for 8 days. She explained about some of the customs that she and her family enjoy over Hanukkah and shared a prayer in Hebrew with us.

Well done to the following children who designed a winning poppy from each class. They were presented with a poppy pen in Celebration Assembly this morning, by Ted Crossland. Thank you to Ted’s dad who organised the competition and judged the winning entries:

Thank you to all our school community who have bought poppies, supporting the Royal British Legion. It was lovely to see all our pupils wearing their poppies with pride. The children have been reflecting on the theme of Remembrance. They have also learned and recited well-known remembrance poems as well as writing their own. Below are two impressive poems from 3H Foxes class, which were shared during their wonderful class assembly. Well done!

On Monday 13th November, Ted's Dad, Commanding Officer Crossland, visited Oatlands Junior School to help Year 4 mark Remembrance Day. He told the pupils lots of information about life in the army and they were able to acknowledge the Armistice with a minute's silence. This followed The Last Post, which Private Holliday played on his bugle.

Thank you for your fantastic support in making harvest donations this year in aid of the Harrogate Homeless Project. The response has been wonderful! On Friday 13th October we welcomed Carol Norrie from the Project, who was extremely grateful for the donations. Her informative talk opened our eyes to the work they carry out and it was great to hear what a big difference your generosity will make. Thank you again.